Everyday Math at Home
Math lives at home with us.

"Children of three years already know how to count as far as two or three when they enter our school. They therefore very easily learn numeration, which consists in counting objects."
—Maria Montessori, The Montessori Method 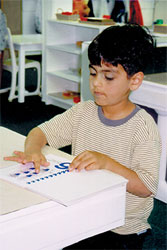 Maria Montessori wrote the above over a century ago. Today children entering pre-school or kindergarten are expected to know many things that were not required in earlier generations: how to write their names, recognize letters and numbers, and know their address, phone number, parents' names, etc.

Knowing and understanding are two different skills, however. Hearing a preschooler repeat such information might mislead you into believing the child understands the concepts involved in putting letters together to make a word or relating numbers to a quantity of items.

Early math concepts have been incorporated into your child's daily life from a very early age. Maybe you played "So big" with your baby, asking him "How big is baby?" Then you raised his hands over his head when you said, "So-o-o Big." Or you played "This Little Piggy" when you washed his toes. These are introductions to the concepts of large and small.

Your everyday activities include vocabulary you might not have thought of as "math." For example: Naming the shapes of blocks, building a tall or short tower, or counting to see who has more blocks. You might measure and record his height or speak of a gallon or quart of milk. These are all examples of early math concepts that your child is learning unconsciously.

Chances are your child can count to ten by the time she goes to pre-school. She has probably been introduced to numbers in a book you have read together or board games you have played. As you go about the day's activities, for example, you may count together as you climb the steps, fold the laundry, or watch the birds at the feeder.

A child of two-and-a-half or three can begin counting objects. It is important at this age to concretize numbers by attaching them to objects. How many apples are in the bowl? How many people are in the room? A child will take some time moving from counting by rote to the idea that the numbers correspond to a specific quantity. Keep counting, allowing your child to actively move as he counts things - perhaps his toy cars, his toes, or the crackers on his plate. Most important, keep it casual and spontaneous. He is learning and will demonstrate his understanding of the concept in his own time. It will happen automatically.

As your child grows, he will begin visually to identify the numerals - perhaps from a book or game you play together. The Blue Number Counting Book introduces flocked numerals that children can touch and trace. The book, Butterfly, Colors and Counting, shows the numeral next to the butterflies on each page. Try to count items that match, since children may be confused if you are counting diverse objects. Count just the number of feet under the table or only the number of books on the table, rather than both at once. 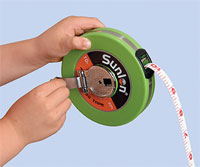 Ideas of addition and subtraction may be incorporated in many daily activities. "I ate one apple and now there are only two left." "If you get the two blocks from the shelf, then we will have five altogether." "I need two more plates to set the table."

Children love to measure things with a tape measure or ruler. They may or may not be able to read the numbers on the tape but can enjoy the process of discovering the longest or shortest. When you make cookies with your child, measuring out the ingredients introduces the idea of fractions.

Children learn to count or identify shapes easily through books, songs, and everyday games or activities. The understanding comes when you least expect it.

One mother described how her three-year-old son made a geometrical observation just after the contractor had taped the drywall in their new addition. After looking for some time at the expanse, he exclaimed, "There's a big triangle on that wall!"

Remember, we are not giving lessons here, but simply verbalizing concepts we adults take for granted.

In the Montessori classroom, children are introduced to counting with the red and blue Number Rods. Children understand that the long number ten rod is ten times longer than the short number one rod. Children begin to absorb abstract concepts when they are comparing the graduated sizes of the Pink Tower to the Brown Stair or learning the decimal system with the Golden Beads.

In his book, Math Works, Michael Duffy describes Montessori's method for primary and elementary math. He demonstrates how these elegant and unique materials correlate positively to the math requirements of the new Common Core. He reminds us that "One of the most basic principles of Montessori mathematics is that students always learn new concepts with concrete materials."

Whatever math curriculum your child learns in school, the early exposure to concrete mathematical concepts at home will be a plus. Keep having fun as you discover all the math that lives with you at home!