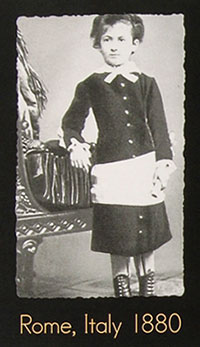 Light years ahead of her time, Maria Montessori developed a theory of education that continues to thrive more than a century after she opened her first school. Perhaps your children attend a Montessori school, or maybe you home school with inspiration from her method. Noticing how children were challenged by the expectation to behave as adults in a world created for grown-ups, this amazing woman is responsible for, among other things, the revolutionary introduction of child-size furniture.

• Maria Montessori was born in Chiaravalle, Italy in 1870. Encouraged by her mother to continue with her education, she became the first woman to receive a medical degree from the University of Rome in 1896.

• She began developing her teaching methods when she worked as a pediatrician in a psychiatric hospital for "deficient" children. With inspiration from the research of Seguin, Itard, and Froebel, she began creating educational equipment for children who were considered unteachable. The results were unbelievable!

• Dr. Montessori used the term "scientific pedagogy" to explain her continued study, research, and observations of young children. She designed lessons and equipment to help children develop their muscles, care for the environment (Practical Life), and educate the senses (Sensorial Materials). She also created innovative materials for language, math, history, geography and science. These didactic materials remain relevant to this day, helping children learn skills from the simple to complicated, and from the concrete to abstract. 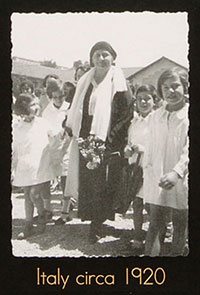 Following her success with special-needs children, Dr. Montessori was asked to create a school for "normal" children. Casa dei Bambini (Children's House) opened in the poverty-stricken San Lorenzo district of Rome in 1907. As a result of her teachings, the children dramatically changed. They learned to take care of themselves as well as their school while being exposed to lessons and tools that taught them how to succeed in life.

• Dr. Montessori's careful observations also led her to develop theories on how children learn best. Her ground-breaking discoveries of a young child's naturally absorbent mind and innate love of purposeful work and learning led her to give students freedom within a carefully prepared environment equipped with what they needed to grow and learn. Most important was her belief in cultivating a respectful attitude toward the child. For more, see About Montessori.

• Word of her work spread as she gave lectures about her discoveries. Other schools were opened in Italy and she held her first training course for teachers in 1909. That year her first book, The Montessori Method, was published.

• By 1911, the Montessori system of education had spread around the world - to the United States, Argentina, England, Switzerland, Mexico, and Korea, to name a few.

During her trip to the United States in 1915, Dr. Montessori's "glass classroom" allowed attendees at the Panama-Pacific International Exposition in San Francisco to see children at work. During this visit, she also trained teachers and addressed the National Educational Association (NEA).

• Dr. Montessori continued to teach courses throughout Europe and expand her influence over the next 20 years. As political situations changed before and during World War II, she moved from Italy to Spain, then to the Netherlands. While giving a three-month course in India in the summer of 1939, Italy entered the war with Germany as an ally. Montessori and her son were held in India by the English as "alien enemies" until the war was over. Fortunately, she was allowed to continue her work in India, training those who came from around the world to learn her ground-breaking educational system.

• In 1946 Dr. Montessori moved back to Amsterdam, which enabled her to help re-establish her schools throughout Europe. She expanded her theories to include adolescents and infants, stressing that children are the future and our hope for peace.

• Having lived through two world wars, Montessori continued to lecture and write about the importance of education in promoting peace. With interest and support from Gandhi, Freud, Edison, Graham Bell, among others, she was nominated for the Nobel Peace Prize three times. She continued to lecture and give training courses until her death in 1952. At the last International Montessori Congress in May, 1951, Dr. Montessori closed the session by stating, "The highest honor and the deepest gratitude you can pay me is to turn your attention from me in the direction in which I am pointing - to The Child."

Hainstock, Elizabeth G., The Essential Montessori, An Introduction to the Woman, the Writings, the Method and the Movement, Penguin Books, 1978 (revised 1997).